First published in Spectacle in 2018.

My dad tells you to buy a new Cadillac, donate blood, insure your home with State Farm—and you do. Every Wednesday night, fourteen million of you tune him to hear him tell his wife that those jeans make her look fat. How you laugh! This fall, he’ll save America from North Korean terrorists. And while you shuffle out of the theatre, clutching your crumpled bag of soggy popcorn, you and your buddies will agree that America would be a better place—and funnier—if my dad was really the president.

We are on the jet back to Los Angeles when Dad gets the call that he’s scored his third Emmy nomination. Doyle pours frothy champagne. Bronwyn wipes mascara off her plumped cheeks. She and Dad have been married for three weeks. What luck!

Doyle hands me a glass. He’s been Dad’s bodyguard for four years, ever since Dad was stabbed. Before that, Doyle had been an occasional golf buddy. He’s the size of a door. If Dad’s out in public, Doyle is two steps behind with his SIG Sauer P229 in a holster under his left arm. He promises he will teach me to shoot.

Dad kicks my shoe with his. “Me and Bronwyn this year, Lulu.”

My name is not Lulu. He calls me that because he says I remind him of Boss Hogg’s wife on The Dukes of Hazzard. I’ve told him there has to be a more modern fat-lady reference he can use, but he loves Lulu. “You’ll be at school anyway.”

Every year, Dad finds an excuse to keep me off the red carpet. Last year, he had to take Grandma, who he said might not live to see the next ceremony (she didn’t). The year before, he took Doyle to thank him for saving him when he fell off the yacht in the Seychelles. This year, he has to show off Bronwyn’s face. It cost a lot of money.

“You only get to bring one guest?” Bronwyn asks. She clinks her diamond against the stem of her glass and Doyle pours more champagne.

Dad looks out the window at the darkening sky. We’re flying away from the sunrise. His finger twitches the page of the Sky Mall magazine, open on his lap. Dad is obsessed with Sky Mall. He spent eight thousand dollars on an elephant statue—which, strangely, actually makes sense in the landscaping disaster that is the backyard of his Malibu estate. Don’t call it a house.

Dad met my mother when he was shooting a Lifetime movie. He played a soldier back from war with a limp and a broken heart; my mother was an extra in the diner scene where he proposes to the exotic-dancer-turned-school-teacher who heals his body and soul. They were together for two weeks. Then Dad got a call from All My Children, and he was off to New York. My mother left me with his doorman when I was seven weeks old, then threw herself off the George Washington Bridge.

Bronwyn snores. Not in the delicate, adorable way you might guess, based on her delicate and adorable size. I have the world’s most expensive noise-cancelling headphones, and even they can’t drown her out.

Dad gave me a Maybach S600 for my birthday. I drove it once. I assure him that I don’t have time for the Emmys anyway, say that my thesis is at a critical point. I received my masters in accounting three months ago, but Dad has a lot on his mind. He’s an executive producer on three shows on CBS.

“We’re on the brink of big things for your mom,” he says.

I laugh, and Doyle looks at me over the top of the Times. “Seriously. I am never calling her that. She’s 24.”

“It’s okay,” Dad says, his voice cheery. It’s not okay. He doesn’t have a poker face, on screen or in life, which is why he’s best suited for comedy.

Dad has been married four times before: Courtney, Alisa, Auriele, Tori. On their wedding day, I found Bronwyn on the toilet, her Pnina Tornai dress hiked up around her hips, sobbing. I patted her bronzed shoulder and told her that I was sure Dad loved her more than any of the others.

We’re somewhere over Arizona when I hear, faint but clear, Waylon Jennings singing. Everyone’s asleep except Doyle. We look at each other across a carpeted aisle the color of an exclusive tropical beach. I raise an eyebrow: Do you hear that? He lifts his chin: The cockpit? Our pilot is playing the theme to The Dukes of Hazzard. Another prank of my father’s, and he’s not even awake to enjoy the white of my fingers as I grip the Poltrona Frau leather seat. If I could will the plane to the earth at this moment, I would.

“Making their way, the only way they know how,” I whisper-sing, and the turbulence starts. When the oxygen masks pop out of the ceiling panels, Bronwyn screams. She doesn’t stop until they put her in the back of the ambulance. She broke both ankles and her new nose. Dad has a sprained wrist, probably. I have a pair of black eyes from being hit in the face by a Coach bag. Doyle’s unharmed. You can’t hurt a door.

Dad insists that Doyle and I take the limo to the hospital. He kisses me on the forehead before climbing into the ambulance next to his wailing wife. Bronwyn doesn’t know that, while the paramedics were taking her vitals, Dad asked me to come with him to the Emmys.

It’s more than two months until the ceremony. The plastic surgeon will fix Bronwyn up just fine. Dad smiles, but his face says he’s worried. “I’m pretty sure her nose will be fixed by then,” I say. “I don’t need to go.”

It took ten thousand dollars and a helicopter, but the butler was able to find and hook up a television so we could watch the broadcast from our cabana on the beach. Dad looks so lonely on the red carpet by himself. Eight thousand miles and an iffy satellite signal can’t hide the bags under his eyes. The reporter from E! with the new breasts asks him how it feels to know his daughter embezzled his fortune and disappeared.

Doyle says he’s going for a swim. I finish the postcard and hand it to one of the servants before I join him. To Dad and Mom, with love, Lulu. 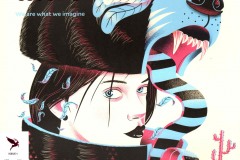 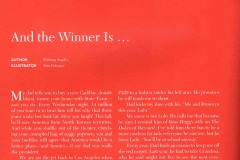 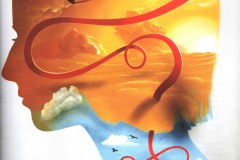 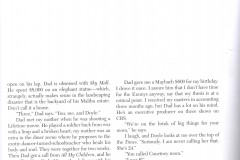 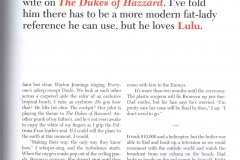 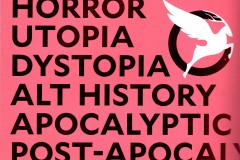