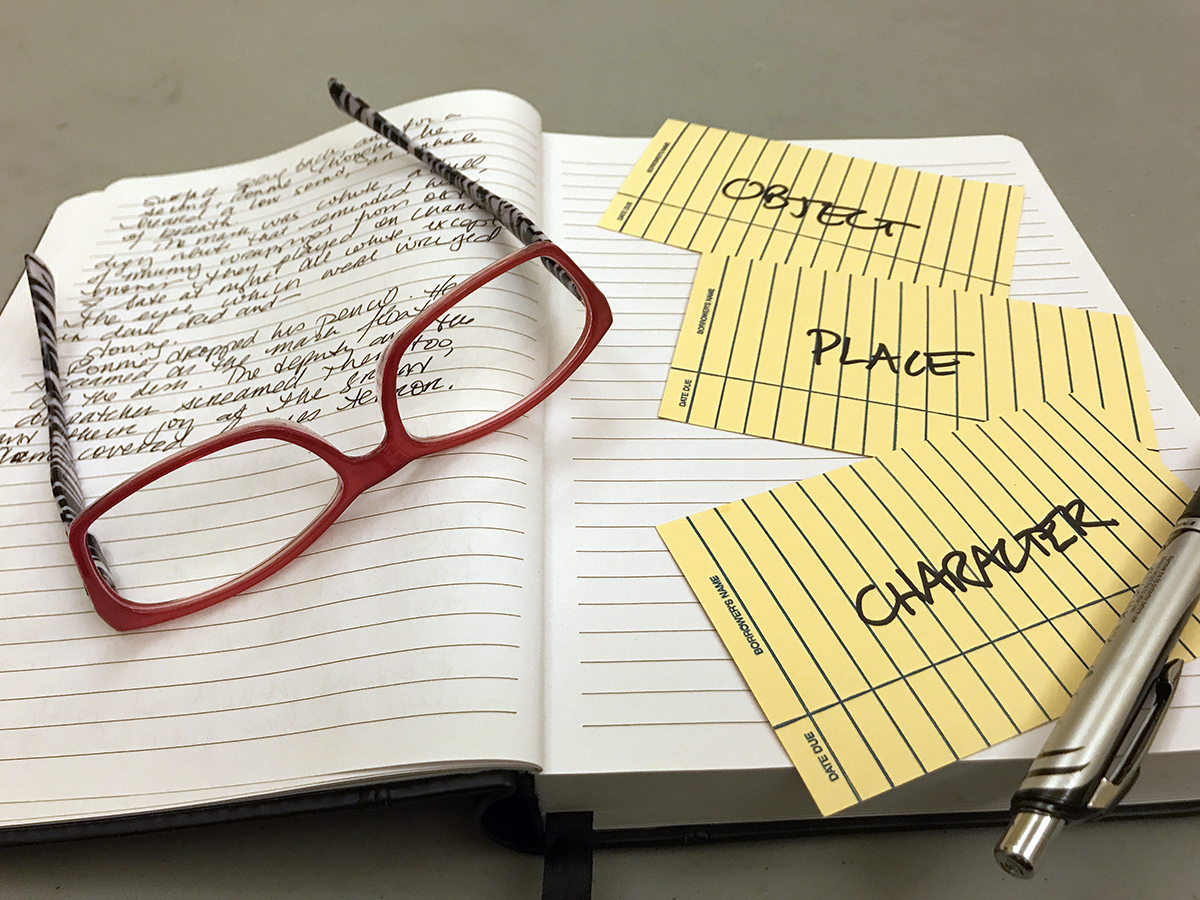 Happy Halloween! Last night we had a blast doing Halloween-themed writing prompts for our yearly Haunted Inkwell. This year, we each picked a character, place, and object from a set of cards, and spent five minutes writing a short scene. The results were sometimes spooky, and sometimes hilarious. Here are mine!

Ronnie hid in the supply closet until the station grew quiet. The night shift was just one deputy and a dispatcher. Ronnie could see them at the front desk, watching Game Seven.

He almost laughed out loud when he realized he was actually tip-toeing down the dark hallway. The chief’s office was unlocked. A half-empty bottle of Pepto sat in the middle of the desk, and next to it was the mask.

Ronnie poked it with the tip of his pencil. The rubbery surface sprang back, and for a second, Ronnie thought he heard a low sound, an inhale of breath.

The mask was white, a dull, dingy white that reminded him of mummy wrappings from old movies they played on Channel 7 late at night. All white, except the eyes, which were ringed in dark red and—

Ronnie dropped his pencil. He screamed as the mask floated off the desk. The deputy and the dispatcher screamed then, too, and their joy at the grand slam covered Ronnie’s terror.

Billy’s hands were full of… not paper, but not cloth. Handfuls of mummy clothes? Dammit, he needed Shelby. She always knew the right words. But whatever had worn these… wrappings… had taken Shelby and run off toward the covered bridge.

Billy stopped right where the shadow started. He wasn’t scared. He threw three touchdown passes and rushed for 40 yards in the comeback game of the season versus Waterloo just the night before. A guy wearing old bandages was no match for QB 1.

Billy’s bladder let go. He rubbed at his crotch with the wrappings, and then squealed when he realized what he was doing. There were wrappings in the dirt at the edge of the bridge. What did it look like without them? Why did Billy’s brain insist on calling it an it?

“I’m coming, Shelb,” Billy whispered, and stepped into the black.

Nelson crouched behind a stack of 1986 yearbooks. The mold down here was going to set off his asthma soon, and his inhaler was up in the computer lab. No worries. It would only take a few minutes to reprogram the device, save the school, and—

Footsteps. How had Agent Jones found him down here? The last time he’d seen Jones and his partner, they’d been sailing away over the Bluff in a hot air balloon. Nelson was sure he’d shot Jones at least twice, but here he was, coming straight toward him past the boiler with its fiery heart.

“Seems like you have nine lives, agent,” Nelson said, bounding to his feet.

One quick move and Agent Jones would be screaming his last breath, his flesh melting in the heat of the school furnace. The perfect ending for the diabolical government agent.

“You’re really a pain in my ass, you know that, kid? Why couldn’t you just walk away when you found that computer virus?”

(I will never forgive Alex for making ‘hot air balloon’ one of the objects. What even happened in this story?!)

Why Rob gave up his boring but safe job as a school janitor to join the Navy was beyond him. It sounded adventurous, sure, but here he was, cleaning toilets on a submarine in the middle of the North Atlantic. He hadn’t heard from Julie Ann in a month.

His fellow sailors were slobs, to say the least. He found the most disgusting shit in the stalls at the end of the night—condoms, sure, cigarette butts, skin magazines. But also stuff he couldn’t wrap his head around: a vial of what had to be blood, a crucifix with Jesus upside down, and a leather bag full of chicken bones.

He was nearly done when he found the mirror. It was small—it fit in the palm of his hand—but heavy. Silver.

He looked at his reflection—buzzed-off hair, black eye and split lip, and thought of Julie Ann again.

And there she was, in the mirror, smiling at him. Turning around and around, in nothing but a little nightie he’d never seen before. And there was Billy Johnson. Rob squeezed the mirror until his hand dripped blood.

Jemma looked out at the quad over the top of her glasses. Across the grass sat the lot of them—Chelsea, and her sorority friends. Jemma felt heat rise in her face as she remembered listening—again—to Chelsea and Brandon the night before, all panting and grunting. She nibbled the top of her pen.

Jemma looked at the girl who’d sat down beside her. “It is.”

Jemma handed it to her. She wondered if the girl could feel the power that coursed through it, if she could tell the pen held dark and terrible secrets. Write a name with that pen, and both ink and blood would flow. Jemma had written C-H-E-L- before being interrupted.

The girl turned her notebook over and scrawled her name before Jemma could even scream. Her throat split, ear to ear, a ghastly grin. Jemma screamed then, and people came running. She buried the quill in her bag.

(Clearly I forgot about the plucky teenager part. Well, Jemma seems like she was probably plucky before college, right?)

We’d reached the crossroads. Metaphorically and literally. We could keep going into the night, try to outrace the angry mob and frightened families on our heels. Or we could surrender. And there was a choice there, too: the silver knife that lay between us on the cracked leather of the front seat, or wait for village justice, a rusted ax or shower of bullets.

Jess’s breathing slowed. She turned more slowly than I did. At the first moment of the full moon, I was on my haunches.

I found her hand, the nails long and ragged now. “Let’s run,” I said. She nodded.

We peeled away from the crossroads in a spray of gravel. The knife clattered to the floorboards beneath Jess’s feet.

In the rearview mirror, I saw headlights. We howled. We ran.